The Gospel According to the Romans

Judaism
Genocide in Canaan
Gave God’s land to the Jews;
But genocides in other lands
Are Yahweh’s big taboos.
Buddhism
All life is suffering,
Yes, all our life is pain;
Then I must be a masochist –
I’d love to live again.
Norse religion
The first gods killed a giant,
From his skull to make
The sky, and mountains from his bones –
What lies! No talking snake?!
Christianity
Jesus wasn’t Jewish
And his killers weren’t from Caesar;
At least, so Paul said after
An epileptic seizure.
Islam
There is no God but One,
Perfect in every way;
All creatures do His unknown will –
So there’s no need to pray.
Mormonism
To teenage Joseph Smith
An angel showed gold plates
On which he read ‘Jesus Was Here’ –
It got him lots of dates.
Modern Paganism
Pretentious modern pagans
Without a sense of spoof
Have got no clue what…

In my previous post on civics, I talked about the structure of the federal government and how it works.    Knowing that is a fundamental part being able to get things accomplished, as well as knowing what needs to be fixed.   Ideals are wonderful, but if you don’t know how to make those ideals become reality, they’ll remain just that.  Ideals.  Nice theoretical constructs, but nothing that actually happens.   But that’s just one of several governments you should be concerned about if you’re talking about getting progressive ideals into progressive reality.  As it turns out there’s another 50 to look at, and yes, the Constitution as well as Congress gives them certain responsibilities.  Those are the states.

Pouring My Art Out

I guess one thing that always bothers me about the new, more militant religious conservative Christians, is their complete failure to grasp the message that the person they claim to follow was really trying to teach his followers. Not once, as far as I can remember, did Jesus ever stop and ask somebody what religion they followed before he offered to help them. And considering the fact that he started off with only 12 guys who could even be considered his followers, that pretty much means that everybody he helped was a non-Christian. I mean, not to put too fine a point on it, but the way he got new followers was to show them compassion and love regardless of what they believed. Maybe that was the whole idea of his teachings. To show so much compassion and love to other people that they became intrigued by him and ended… 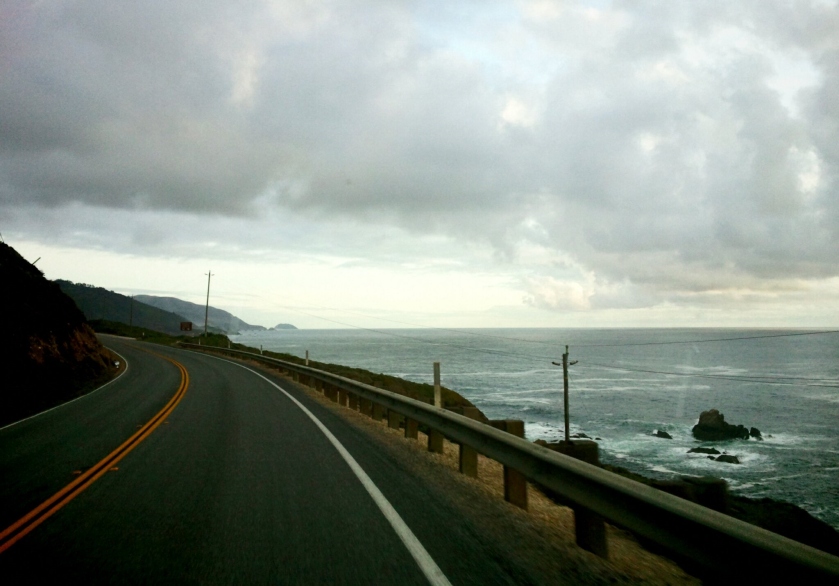 We are molecules in motion.  Only not just.

We are descended from the cosmos — “A way for the universe to know itself.”

We are particles that dream. Atoms that love. Star dust configured to comprehend its own existence.

We are kin and kindred to every earthly organism that is or ever was and perhaps ever will be.

We sail across an ocean of  human toil and pain and blood…and of  hope.

We are curators of knowledge. Co-authors of the human story.

At our feet, all of human achievement, above us endless possibility, within us untapped potential.

And the truly beautiful part, the sweetest, most succulent, warm and fuzzy, spine-tingling, uplifting, stupefying, humbling, unequivocally, undeniably most beautiful part about it…

Is that everything I say is true and proven true.

We are all molecules in motion.

Outside of the semantics, I don’t see it.

The woman in front of Ol’ Glory is Holly Fisher, who wanted to make liberal heads explode.  But all she made us do was bust a gut. They literally worship the same God.  Once again, great stuff from ‘Real ‘Murica.’ Love it. Free your mind.

I don’t and this video by Laci Green explains why.

Still buzzing from California calling for a Constitutional Amendment to get money out of politics.  Figured I’d spread the love.

The state senators who voted yes to regulating against the corrupting influence of money in politics:

On a happily related note the DCCC has started a petition for a Constitutional Amendment to overturn Citizens United. They’re looking for 1.5 million signatures.  If you want to add your name to the list (and don’t mind giving your e-mail tot the democratic congressional campaign committee) you can do so here.

The California State Senate just passed resolution AJR1, introduced into the State Assembly by Representative Mike Gatto, nearly 2 years ago. AJR1 calls for a Constitutional convention for the sole purpose of establishing that corporations are not natural persons and money is not speech and therefore can be limited through legislation.

California joins Vermont in passing a resolution calling for a Convention. We need 34 states to pass resolutions to convene a Constitutional convention and draft an amendment.

The resolution got an ovation after it passed, not from onlookers in the gallery, but from the senators themselves on the floor.  They just struck their own blow to free themselves from incessant fund-raising an influence peddling.

As I said last night, we’re in the early stages of what will likely be an ugly, protracted political dog fight against some of the richest, most powerful people in the world.  Typically those kinds of fights don’t go well for the little guys.  But with an issue in which 96% of the population is in agreement and with grassroots activism driven almost entirely by citizen-funded volunteer organizations, things can have a way of snowballing.

We’re coming to take back our democracy.  We believe it’s possible, and we’re ready for a fight.

BTW, Tom Berryhill, the state senator for my district, who has been fined for laundering campaign funds and, in my experience, all but refuses to meet with constituents, voted no. He will NOT be getting my vote going forward and wouldn’t even if I agreed with him on every other issue.

The California State Senate is set to vote on AJR-1, a resolution introduced to the California State Assembly in 2012 by Representative Mike Gatto. It calls for a constitutional convention for the purpose of revoking corporate personhood in regards to free speech and limiting campaign finance.

It has already passed the California State Assembly.  And the Senate judiciary Committee.  It was set for a vote last Thursday, but was tabled for unspecified reasons (rumors are some of the yes votes were absent at the time).  It has been rescheduled for a vote on Monday, June 23, 2014.

A very similar resolution has already passed in Vermont.  The movement, led by Larry Lessig and other citizen-funded groups was the very definition of grass roots. (Registering nary a ripple in the national media, of course.)

Similar resolutions are in various stages of percolation in 10 different states, introduced and supported by both Democratic and Republican legislators who’ve had enough.

It is also critical to note that constitutional conventions are required be very specific.  They can only be held regarding the issue for which they were called. No switcheroos or add-ons after one has been convened.

Needless to say, if AJR-1 does pass in California, it would be historic.  The largest state in the union would have called to amend the U.S. Constitution for the express purpose of returning the democracy back to the American people.

It would be a chance to undo the damage done by the 2010 Supreme Court decision in Citizens United v. Federal Election Commission (FEC) which proclaimed corporations as people and preventied bipartisan campaign finance reform on the grounds that money is speech protected by the U.S. Constitution, as well as McCutcheon v. FEC decided in April of 2014, in which SCOTUS struck down many of the remaining limits on campaign contributions. These decisions  effectively allowed for the purchase of entire elections by private interests.  It’s what led to the explosion of Super PACs and their shady regulations.

But let’s call this for what it is: legalized corruption.  A recent Princeton study found that voter opinion has no discernible influence federal lawmakers.  The only opinions that moved the needle were rich donors and the lobbyists that work for them.  In other words, lawmakers are only listening to the people who fund their campaigns. Money for influence. All that comes out of it is voter apathy and stymied political discourse (and cash windfalls for a select few). It’s the reason we can’t do anything about climate change, or for-profit prisons, or gun control, or our schools, or any of the monumental and mounting issues we face.

So long as SCOTUS holds that money equals protected speech, they can shoot down any campaign finance reform law anyone tries to pass.  And so far,  they pretty much have.

AJR-1 is a means to put an end to this broken corrupt system.

Of course, that’s if it passes.  And make no mistake, it would only be the first salvo in what could very well be a long and hard fought political war.

But however the vote goes in the California State Senate, the fight is only beginning.  Often times, the powers that be try to slow cook hot-button issues. They wait for the furor to die down, occasionally placating the disquieted masses with some meager, symbolic concessions, then get back to business when the noise dies down and interests shift (the 4 biggest banks are bigger now than they were before the 2008 crash…por ejemplo).

We can’t continue to let this happen.  It’s not about going after the super rich donors or even the politicians.  Its about tearing down the system that has squeezed the people out and made us inaudible.

We’re late in the game in California, but if you support the idea of exercising the power of the people and getting money out of politics, I urge you to call your California state senator Monday morning (you can find your state reps here) to let them know you support AJR-1 and you want them to vote yes.

Even if you don’t live in California, call your state legislators.  Let them know  you support a constitutional convention to get money out of politics.  Demand it. Tell them you want your democracy back.  (Unfortunately, there doesn’t seem to be a catch-all database.  The best way to find your representatives is to type in “who are my representatives” and then your state in your favorite search engine.  Usually in the first 2 or 3 choices you’ll find one that only requires your address or zip code and then finds your reps along with contact info for you. Teh interwebs are awesome.)

96% of Americans say that the influence of money in politics needs to be reduced. 91% believe nothing can be done about it.

It’s well worth it to show them.

Bill Watterson is the Bigfoot of cartooning.

He is legendary. He is reclusive. And like Bigfoot, there is really only one photo of him in existence.

Few in the cartooning world have ever spoken to him. Even fewer have ever met him.

In fact, legend has it that when Steven Spielberg called to see if he wanted to make a movie, Bill wouldn’t even take the call.

So it was with little hope of success that I set out to try and meet him last April.

I was traveling through Cleveland on a book tour, and I knew that he lived somewhere in the area. I also knew that he was working with Washington Post cartoonist Nick Galifianakis on a book about Cul de Sac cartoonist Richard Thompson’s art.

So I took a shot and wrote to Nick. And Nick in turn wrote to Watterson.