I don’t and this video by Laci Green explains why.

I was waiting until Mother’s Day to post this but I’m feeling it a little too much.  I’ll have to figure something else out.

I’ve got to put up a little fight for the male feminists (…fe-man-ists!).  I know some people will be turned off by the word feminist because it has been demonized by the Rush Limbaughs of the world.  And, as happens with many social-activism movements, the radical element is now in the driver’s seat–partly because, rather than standing their ground, reasonable people walk away when the lunatics start screaming.

But the feminist movement wasn’t originally about male-bashing or even forcing women int0 the workplace; it originated to liberate women from being confined to homemaking, discrimination and harassment in the workplace, being unable to explore and express their sexuality, and the stigma of coming forward about rape and domestic violence.

I’m in favor of that kind of feminism.  And I believe a lot of other men are, too. (We have got to stop letting extremists set the agenda.)

Besides, there is more to this than gender equality.  It’s about separating ourselves from stereotypes.

I feel like women have several ways of doing that.  Sure, some have been corrupted and others have been defamed and we have to take those expressions back.  But Men don’t really have much of anything.  And we have as many societal pressures as women do–they are different, obviously and men’s issues don’t really involve empowerment, but they exist all the same.

Now–to be fair–I enjoy sexist jokes as much as racist ones.  I’m not “offended” by these stereotypes and I don’t think they should be eliminated from the media or any such goofiness.

I would just like the argument made that this is not representative of all guys–just dumb, misogynistic guys.  Because there is a distinction.  Almost every adult male in my social circle who has children is actively involved in raising his kids, in roles ranging from baby-daddy/baby-mama drama to the traditional nuclear family; there are even a couple of single fathers in there.

All I’m asking is, where’s the pink ribbon for the good guys?

Only not a pink ribbon so much as an energy-absorbing, platinum dragon-scaled battle-gauntlet, but you get the idea. 🙂

So I’m coming back to this series of blogs discussing what I hate about Republicans discussing one point in each blog.  At some point, I plan to move on to what I hate about Democrats, politics in general, and the media (probably sometime in the fall of 2071 at this rate :().  What I initially expected to be 3 or 4 subjects quickly expanded as I started giving the topic some thought.    I limited it to 10:

Obviously, I could write a book on each and every topic–and maybe that’s something I will ultimately do.   The problem with blogging in such a partitioned way is the loss of context which I think is crucial to understanding what Republicans are trying to do.

A good example of this is an element of social conservative philosophy I–and others on the left–call the Fall From Grace theory.  For many social conservatives, the Founding Fathers are, like Christ and the Disciples (or Adam and Eve), fetishized archetypes representing the purity and apex of an ideal–an ideal from which, according to conservatives, we have strayed.  Having fallen from grace we need to “get back to our core values” in order to right the ship.

Sounds familiar, doesn’t it?  It should.  This is a key tenet of fundamentalism.

Obviously this is a nonsensical concept since America’s values have been evolving constantly since our nation’s inception (see slavery, women’s suffrage, civil rights, etc.).  Nor were our founding Fathers of one unified mind.  Their greatness lies in their ability to bring such strong willed and brilliant men of wildly disparate opinions not only to accord but  an accord that still stands among the great achievements in political thought.   But Republicans don’t overly concern themselves about being historically accurate (I’m looking at you, Newt).  In fact, they outright oppose it.  Tea Party Republicans in Tennessee are fighting to have slavery–and the fact that many Founding Fathers owned them–removed from history books (And don’t even think about mentioning Thomas Jefferson’s jungle fever).  They don’t want anything that makes America ‘look bad’ being taught to children.

This is Orwellian propaganda at its unmitigated worst. 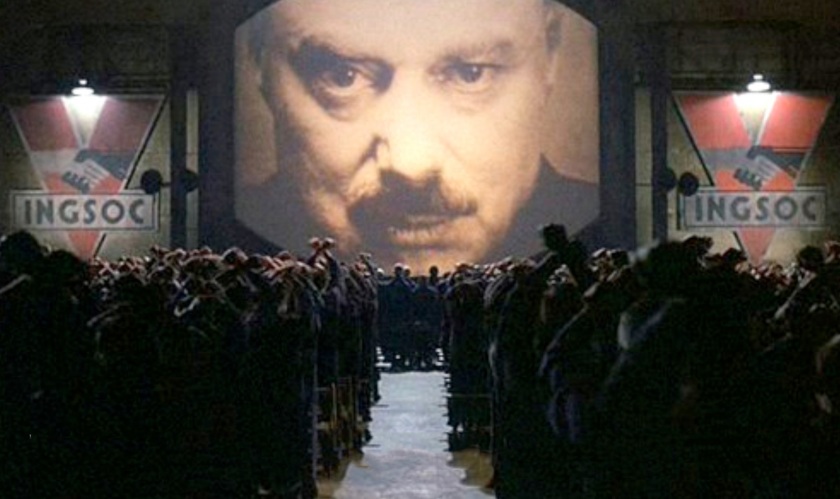 Yet the reasoning behind this philosophy is synergistic.   It incorporates several Republican/conservative ideologies that I am critical of including anti-Americanism, extreme nationalism, and Christian fundamentalism.  This is a crystal clear snapshot of their vision for America.  But when you break the actions down into parts, you can lose the image of the whole.

The Republican party needs to be exposed for what it is: a party of fear and hate.

These are things we should be talking about.  I don’t want to lose the general idea of Republican lunacy because I keep fixing my nose to each little point.

‘Cause there is a lot to hate about today’s Republican party. 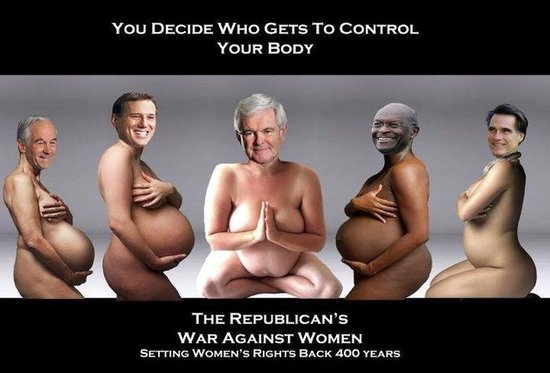 This post was inspired by a rant on Sinister Blog and the subsequent comments and responses.   I’ll be reiterating some of the ideas discussed there.

Why do Republicans hate women?

The answer is, they don’t.  They just hate strong independent women. They hate women who think they are the equal of men.  For them this hate is justified; men are physically stronger.

Leaving aside the fact that pretty much any woman is capable of picking up a .357 and turning your dome into a stadium, we live in the age of information and technology.  Brains are far more important than brawn.  (And for those of you who would argue that women aren’t as intelligent as men, I would say that this is the point where I must beg your leave so that you may return to digging in the mud with your mighty fine stick.  Never argue with fools, I says; let them run and play.)

For the rest of us, we need to understand how we got to this point before we can truly determine where we need to go.

Religion, as in nearly all things in our culture, plays a significant role in the subjugation of women.  Religion didn’t give birth to misogyny, it merely justified it.

Back in the hunter-gatherer days, marriage didn’t really exist, not the way we consider it today.  Groups of people stuck together for protection and to raise young but there was, generally speaking, and so far as we can tell, no higher purpose.

As hunting and gathering gave way to farming, the importance of owning stuff increased.  People wanted to pass their lands on to their kids.  A fertile wife could provide lots of children to help out around the farm.  So a “good woman’ (i.e a virtuous woman) had value.  Monetary value.  A virtuous woman was one about whom their could be no controversy regarding the paternity of children.  The easiest way ensure this was by marrying a virgin.   Thus a virtuous woman was either a virginal woman or a faithful mother and wife.  At the same time, nobody wanted this other woman to take the family’s hard-earned (and often hard-fought for) possessions, so ownership passed from father to son.  A woman was considered an asset, like a sturdy mule.

So marriage wasn’t always the wondrous union of love-struck souls it supposedly is now; it was a business transaction.  This social contract was codified pretty much unanimously in the western religious texts:

We always quote the first part, but not the rest.  Kinda changes the meaning, doesn’t it?  And remember that the Old testament is a canonical religious text for Jews, Christians, and Muslims.  There are other texts that demand a woman’s submission to man, but Deuteronomy clearly illustrates the idea that a woman was viewed as a man’s property, like his slaves, his animals, and his land.

Like all things, the role of woman has evolved over time.  What has remained constant, however, is that in nearly every return to cultural piety, the status of women is greatly reduced.  There currently is an effort to return to those times once more.

Unlike many other issues of social injustice, gender discrimination is not confined to religious fundamentalism.  It is far more pervasive and goes to the core of our culture itself.  The true liberation of women requires a fundamental redefining of gender roles.  Women can take care of themselves and no longer need men to provide for them.  When a man can no longer hold over a woman provision for her lifestyle, he is forced to use other, less developed skills to maintain her favor.  It gives women much more control in relationships and other social interactions. 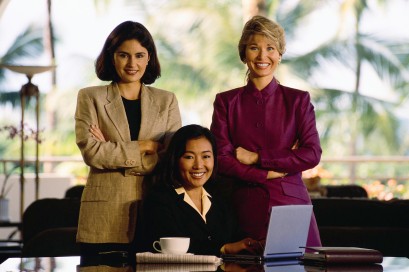 Additionally, women have increasingly become legitimate competitors in the professional world.  Women graduate from high school, college, and graduate school at higher rates than men.  Women also tend to get better grades in school.  More young women have become disinterested in starting a family, preferring instead to pursue other interests.

Then comes the scary part: women asserting their sexuality.  Women have become increasingly free to explore and express their sexual desires and interests.  And it turns out, women are as kinky and perverted as men (over 30% of all pornography is purchased by women). That all sounds fine and dandy…until your girlfriend breaks out a surprise apparatus she wants to try on you.

Things can get a bit confusing.

I believe this confusion has led to resentment from men and women alike.  The backlash seems to have started sometime in the 1990s when women’s liberation was rolling along.

I started hearing terms like feminazi catching steam.  “Shut up and make me a sandwich” jokes started making the rounds again.  Then corporations began doubling down on the glass ceiling.  Equal pay became an unreasonable demand because women are hormonal and unreliable employees.  In the media, women became increasingly portrayed as victims of physical and sexual brutality or objectified for their sexual beauty.  Pornography got flat out violent.  Slut shaming became vogue again.  And now, reproductive decision-making is being taken out of women’s hands and given to the state.

I don’t think it’s a stretch to see the interconnectivity between these events.  They’re man’s way of reasserting gender dominance.  Unfortunately for its proponents, this reassertion is nothing more than a last desperate gasp.  In the end, the War on Women will share the same fate as the Jim Crow south.  The extreme vestiges will linger; the rest will die.

As with any movement in social justice, action must be purposeful and deliberate.  And in the push for women’s rights we are doubly obstructed.  Women are as confused by the redefining of gender roles as men.  Many women conform to the male-driven ideal of sexual objectification and submission to remain appealing; many other women conform because they agree with it.  Plus, many women are confined by their own guilt and shame about their sexuality.

The problem is we cannot, as a society, empower women; women must empower themselves (see Rihanna & Chris Brown).  Society can only give women tools: the information and social programming that will allow them to suffer neither fools nor abuse by a fool’s hand; and to explore their own individuality without constraint or societal judgment.  Women’s liberation is not about making every woman a bisexual-chic big city professional; it’s about a woman being accepted for whatever she chooses to be.

If we truly love women as we claim, we will all work (and fight) to ensure such a future.