This is by far the best political song parody I’ve seen in quite some time.  The song (and video) was made by a group called JustNew Productions (?) based on Gotye’s Somebody That I Used To Know.  It’s a pretty well written parody and I think it’s accurate about how a lot–a LOT–of people feel about Barack Obama.

Probably why the video is going viral.

Well, maybe that and the creative body painting.

Money out of politics.

I don’t know if you’ve heard of Iggy Azalea.  I hadn’t until a few months ago.  For those that don’t know (out living a life and whatnot), she’s an Australian rapper.  I think that says it all.

I came across this video earlier this year and wrote it off as the mildly amusing drek that it is.  By happenstance I came across it again this morning and a thought struck me: “WTF is that kid doing in the video?!”

Please understand, the video is called Pussy–and it’s not a euphemism.  It is a song about Iggy’s genitalia and the enjoyment she derives from receiving oral pleasure–while strolling through her neighborhood dressed like a prostitute, of course.  Anyone who’s followed my blog knows how big a fan I am of trashy hip hop, especially when performed by white female rappers.  Music of the gods as far as I’m concerned.

First of all, it destroys whatever fantasy she’s trying to sell.

Second, who’s effing kid is that?! Get him off the goddamn set!

Imagine 50 Cent performing Magic Stick while holding hands with a 10 year-old girl.  He’d be jailed immediately.  No trial.  And rightfully so.  This isn’t quite that bad, but it’s like 90% of the way there.

The Chicago native has endured–over 21 years–because of his unique and unparallelled ability to straddle the line between poetry and rap.  It’s not hip hop for dummies.  This most clearly evidenced with his inspirational track The Believer off his 2011 album The Dreamer/The Believer.  I find it to be insightful and sometimes moving music that gives me a little something new each time I hear it.

His line, “If he could how would Ernie Barnes paint us/look at the picture, it’s hard not to blame us,” is in reference to Barnes’ custom of painting his subjects with their eyes closed to symbolize our blindness to each others’ humanity.

Likewise, in the verse, “Destiny’s children, survivors, soldiers/in front of buildings their eyes look older,” Common uses the now-defunct R&B group’s name and song titles as a metaphor to describe the saga of young life on the streets.

And lastly, with, “That ain’t the way the Langston Hughes wrote us/soul controllers on the shoulders of Moses and Noah,” Common laments how urban youth, despite possessing biblical potential, are running around with guns; it’s such a shortfall to how poets (and visionaries) such as Langston Hughes described African Americans during the Harlem Renaissance–which was the first real exposure the modern world got to the potential contribution blacks could make to culture and thought.

P.S.  The lyrics are included below.

– Common – Verse 1 –
These are the words of a believer, achiever, leader of the globe
Feeding souls of those in need
I bleed the blood of the struggle
Walking over troubled puddles
Hustles in my chest, no hustle no progress
Extremities of life and it’s process
Birth of a son, death of another
With love I caress both mothers
And tell ‘em, who’s in control is the One that’s above us
I walk where money talks and love stutters
Body language of a nation going through changes
The young become dangerous, pain gets spent into anger
Anger gets sent through the chamber
It’s tough when your own look like strangers
We are the sons of gangsters and stone rangers
If he could how would Ernie Barnes paint us?
Look at the picture, hard not to blame us
But time forgives, in the Chi where the young die often
Do they end up in a coffin because we haven’t taught them?
Is it what we talking? We really ain’t walking
Dues hustlers pay, how much did it cost ‘em?
Find myself on the same corner that we lost ’em
Real talking, in their ear like a Walkman
Thoughts spin around the corner to the World
When I see them, I see my baby girl
Believe!

– Verse 2 –
The lord lives among us
The young ‘uns hunger becomes a means to get it
By any means necessary, under pressure
Children feeling lesser, with the steel upon the dresser
Kill-at-will aggressors, Destiny’s children
Survivors, soldiers, in front of buildings their eyes look older
Hard to see blessings in a violent culture
Face against weapons, sirens, holsters
That ain’t the way that Langston Hughes wrote us
Soul controllers on the shoulders of Moses and Noah
We go from being Precious to Oprah
Cultivated to overcome ever since we came over-seas (seize)
The day and the way that you can see we determined
Solar keeps burning, shorties know to keep learning
Lessons in our life, but life stripes that we earning
Took Gramp’s advice that Christ is returning
Like a thief in the night, I write for beacons of light
For those of us in dark alleys and parched valleys
Street kids spark rallies of the conscience conquerors of a contest
That seems beyond us, even through the unseen, I know that God watches
From one King’s dream he was able to Barack us
The prophets, nothing can stop us
Believe!

I was waiting until Mother’s Day to post this but I’m feeling it a little too much.  I’ll have to figure something else out. 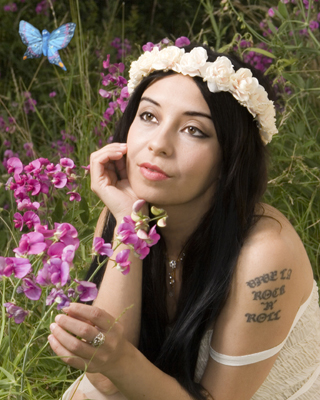 I bet you’re wondering where you’ve seen this woman before.

Well, her name is Kelli Ali (slash Dayton) and besides owning a fearsome-looking set of chompers (seriously) she used to be the lead singer of the English Trip Hop group Sneaker Pimps mildly reknowned for their their late ’90s chart toppers 6 Underground and Spin Spin Sugar.

Anyway, Kelli was unceremoniously–and randomly–dropped from the band after their first album and decided to go off on her own.

She started out doing her own version of the  Sneaker Pimps’ down-tempo electronica style but evolved into this melodious folksy sound.

Hope ya’ll do to.

I always feel like every Brit rock band is doing some version of U2, Radiohead, or the Beatles.

It’s no different with the now defunct group The Servant, who I got introduced to with the music for Sin City. I think their overall sound definitely hovers around that Beatles/Oasis landscape–without being derivative.  What lead singer Dan Black lacks in lyrical deftness he more than makes up for with creativity and presence.

In the end, I’m a sap and they’ve got some great, twangy, singalong type stuff. I wish they were still making music. 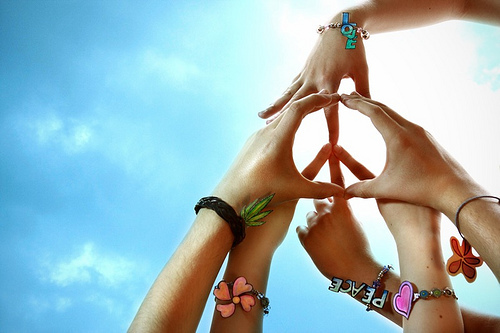 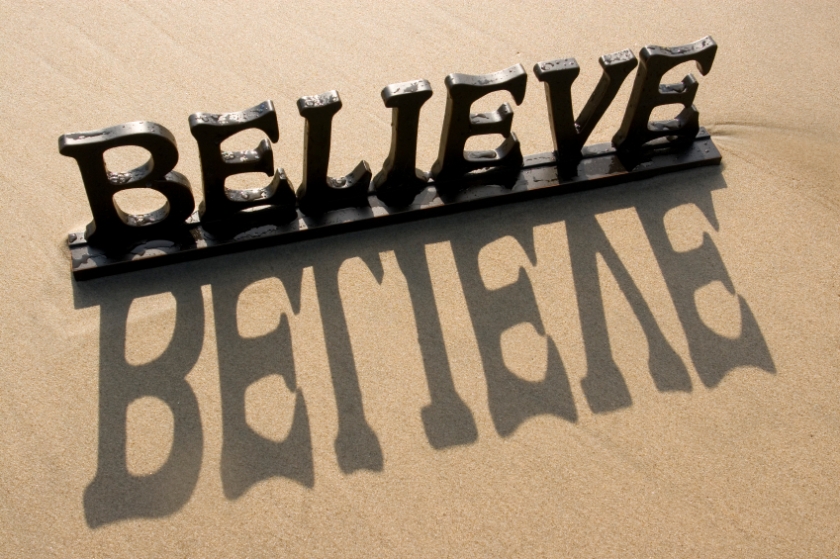 I have a love/hate relationship with labels.  The clarity is great but the rigidity sucks.

I am a human being who does not believe in deities nor any connections or derivations thereof (divine books, origins of birth, miracles, etc.).  I do not deny the existence of any god, I just don’t subscribe to it.  I don’t know what happens after we die (of course, what I don’t know is infinite).

However, I am a believer and proponent of the connection I share with other people–all people, in fact, all living things–the earth, and the universe.  We are cosmic beings, made of celestial material; we come from the universe and to it we will ultimately return.

And we are alive.  I know of no other comparable fortune.  What’s more, we are aware of this gift and can enjoy it for the blessing that it is.

Plus, we are the inheritors of 200,000 years of human history.  I am the beneficiary of the sacrifices and accomplishments of all those who came before me from families, merchants, soldiers, kings, scholars, and philosophers to theologians, artists, inventors, and masons, even bakers and cobblers.  Their achievements have made our lives possible.  They have progressed us–technologically, scientifically, and morally–to our highest point in recorded history.  I believe we have a responsibility to continue their work and leave an even better world than we inherited.  They are examples, not the pinnacle, of how high we can go.  We honor them by striving to exceed them as they exceeded those who came before.  I believe it is our duty, our obligation, to do so (We have a LOT of work to do).

I believe in a world without suffering, where we are each free to pursue our own happiness, so long as it does not infringe on the happiness of others or abandon our sense of responsibility to one another.

Some will call it a pipe dream, an impossible quest for a perfect world; but I respond (echoing Vince Lombardi), perfection may be impossible, but in striving to achieve it, excellence may be attained.

And that’s what I believe.

I just happened to hear this song called Somebody That I Used To Know by Gotye and it was stuck in my head all day.

Now this is the more waaaay more popular cover by Walk off the Earth.  I don’t know how they even came up with idea of  performing it this way.

I usually give the lion’s share of the credit to creators, but Walk off the Earth has the better version.  Sorry, Gotye.  😦

Anyway, this is Gotye’s original version.  Nothing to hang his head about.  I do think he owes Peter Gabriel and Sting a check each for the style swipe.  Still, it’s a very cool song.

For years, DubFX–a.k.a. Benjamin Stanford–buttered his bread via odd jobs in his native Australia. Meanwhile he dreamed of giving it all up to make music.  So finally, he turned in his dish-washing apron and hit the streets in pursuit of that dream.

He began a world tour as a street performer using a looping generator and his considerable beat-boxing skills to perform his songs live.

These street shows are his strong suit.  They display his talent while giving us an intriguing glimpse of his roving and seemingly adventurous lifestyle.  But what comes through the most in his work is his passion for music, life, and the opportunity to live his dream.  It radiates throughout his music. The only thing missing is the promotion.  To me, that’s what makes DubFX (and his girlfriend/partner in crime, Flower Fairy) a hidden gem.

Unfortunately, some of Stanford’s passion is lost in his studio work and supplanted instead with technicality, which he shows us on his independently-released debut album, Everythinks A Ripple.  He probably needs an experienced producer to capture the energy of his live performances.  On the upside, however, he did release a collection of his street performances aptly titled Live on the Street.

I just dig the song.  It’s just made for backyard loungin’.