Kraft Foods, makers of pretty much all cheese (and plenty of other foods) and Intuit, Inc., makers of popular software programs including QuickBooks and TurboTax, have joined Coca-Cola and Pepsi Co. in exiting the corporate lobbying group ALEC.

The Center for Media and Democracy (CMD), creators of the website ALEC Exposed, which, among other things, tracks ALEC corporate membership, noticed that Intuit was no longer listed.  When approached by CMD for comment about the departure, Intuit declined, but the timing is suggestive.

Kraft is leaving largely because of pressure applied by the Trayvon Martin-inspired advocacy group Color of Change, which is targeting ALEC’s corporate sponsors over its support of Stand Your Ground laws.

Various corporations joined ALEC to push for legislation beneficial to their industries.  However, others in the group have taken a more extreme stance leading ALEC further to the right.  According to CMD tracking, corporations continuing their support of ALEC include:

While ALEC will likely never be dissolved, continued pressure on its supporters and increased consumer support for its defectors will lead to more companies walking away and weaken the group’s influence as a whole.

There’s a long way to go, but this is good news for those favoring democracy over corporate oligarchy. 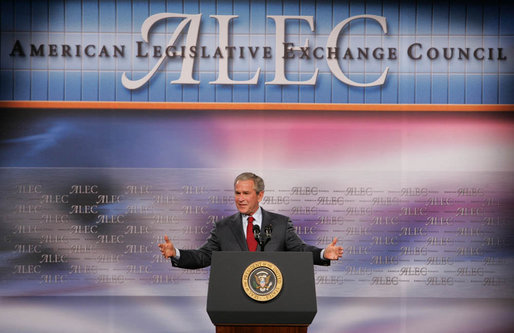 Thinkprogress.org is reporting that in January 2012, Pepsi pulled its support from the American Legislative Exchange Council (ALEC).

This is great news.

For those of us against the excessive influence of corporations on politics ALEC is one of the bad guys.  In fact, they’re one of the handful of organizations at the very heart of the problem.

ALEC is a right-wing lobbying group comprised of a conglomeration of Fortune 500 companies and rich Republicans.  They help enact right-wing model legislation (test markets for legislation like Shoot First/Stand Your Ground) and help coordinate that legislation in other states as well as on the federal level.

ALEC doesn’t just push for legislation, they WRITE the bills and then give them to Republican lawmakers to enact–as-written.  It’s called cookie-cutter legislation; multiple assemblies pass these bills containing the exact same wording; it’s pretty much fill in the blank where lawmakers simply add the district or state, sponsoring legislators, and the legislative body in which it’s being proposed; one Republican lawmaker (from Florida, of course) accidentally submitted a bill with the ALEC mission statement still attached.

ALEC proposed legislation includes (but is in no way limited to):

Pepsi pulled its support for ALEC  in lieu of the unpopularity of Stand Your Ground legislation which ALEC ardently supports (and is currently promoting in multiple states and on the federal level).  The pressure of Pepsi’s pullout forced Coke to follow suit.

This type of defection typically engenders right-wing retaliation.  We need to support Pepsi (and Coke) for making a bold and somewhat courageous decision.

But it does serve as proof that we can make a difference.

So drink a Pepsi today! 🙂

I haven’t talked too much about the Trayvon Martin shooting  because I feel like the system needs to play out.  Like everyone else, I have very strong opinions on the subject, but facts are still coming out.  Unfortunately, as the story evolves, I see the real point of this tragic tale getting lost in the debate over the legality of a child’s murder.

Predictably, it has been politicized…mainly by Republicans.  The right has initiated and perpetuated a smear campaign against Trayvon Martin, blaming him for everything from wearing a hoodie, to confronting a man who was following him (i.e. standing his ground), to having been given a 10-day suspension from school.  Meanwhile, they tsk-tsk those calling for Zimmerman’s arrest because that’s “unfairly judging him in the media.”  This is a two-fold ridiculous assertion, because of the aforementioned hypocrisy, and because trying high profile cases in the court of public opinion is something of an American pastime, from the scopes monkey trial to Casey Anthony, often engaged in by these very same right-wing pundits.

The reason Republicans have been so staunch in their apparent support of George Zimmerman actually has nothing to do with Zimmerman at all.  They are defending Florida’s Stand Your Ground law, which is the main culprit in this case.

It makes sense to lay this all at George Zimmerman’s feet.  But, from what I can tell, Zimmerman is a paranoid kook who grabbed a gun and appointed himself defender of the neighborhood (Neighborhood Watch has come out and said he is in no way affiliated with them is not in accordance with their practices or philosophy).  There are paranoid kooks all over the world and sometimes they kill people because of that paranoia.  This is not to minimize Zimmerman’s actions.  If he is guilty, he should pay to the fullest extent of the law.

Others will charge that racism is the main culprit here, but I disagree.  Obviously, it is a significant factor.  If Zimmerman had shot a 17-year old, blonde-haired, white girl, I doubt Zimmerman’s defenders would find his self-defense excuse so credible.  That is to say nothing of the fact that Zimmerman would likely never have even followed a blonde-haired white girl in the first place.

Even the botched investigation by the primary officer on the scene and the apparent obstruction by the chief of police aren’t the core problems.  The interrogating officer wanted to arrest Zimmerman for murder.  There were people in the department doing their jobs that night.

The real problem is that Florida has a law that changes the nature of  justifiable homicide.  Self defense is traditionally (and logically) an active defense where the burden of proof falls on the defendant, not the prosecution.   The presumption of innocence applies when someone denies committing the crime for which they are accused.  We don’t presume that person is guilty; it has to be proven beyond a reasonable doubt.  When someone admits to committing a crime–as Zimmerman has admitted to killing Trayvon Martin–there is no presumption of innocence.  Zimmerman must prove he was defending himself–as he would have to prove his defense if he said chemicals from a toxic corn dog had rendered him temporarily insane.

Stand Your Ground turns all that on its head.  Under this preposterous law, if two guys get into a drunken brawl  and one guy pulls out a gun and shoots the other, he is now justified in doing so because he “felt threatened.”  In other words, the last man standing is presumed justified so long as he claims self defense.  He can’t even be charged–hence the furor.  If Zimmerman had been arrested and was due to stand trial, the outrage over this shooting would be greatly diminished.

Now, the reason Republicans will do anything–even smear the reputation of a 17-year old murder victim–to divert attention away from Stand Your Ground is because it’s their law.  In 2005, Florida’s Republican-led state legislature passed the bill and Republican governor Jeb Bush signed it into law (with an NRA lobbyist looking over his shoulder as he did).  And as usual, rather than admit that the law is poorly written or (gulp) poorly conceived, or even that the Trayvon Martin shooting goes outside of the law’s intent, the GOP doubles down on their support for the law no matter how heinous a position it puts them in.

This is because versions of Stand Your Ground laws currently exist in 21 states–all Republican-controlled at the time of passage–and ALEC, a particularly vile conservative PAC, is currently trying to make the law federal.  Statistics show that Stand Your Ground has led to a 200% increase in “legally” justifiable homicides in Florida.  The other Stand Your Ground states have seen a similar increase. 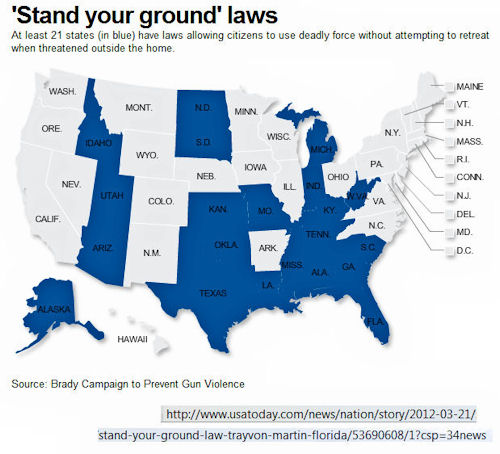 However, the facts are irrelevant.  The Republicans are not going to back down.  They can’t.  Otherwise, the NRA will eviscerate them, as the powerful lobbying group will not be derailed from their goal–in cooperation with the gun manufacturers–of ensuring that as many Americans as possible own and use as many guns as can be put out into the world.

This goes back to the corruption of our system, where the political parties cannot act in the interests of their constituents, much less their conscience.  They have an obligation to their campaign benefactors.  If they buck, or get out of line, they will be put down and replaced by someone who plays ball.  In that sense, it’s unfair to overly politicize the Republican position.  They got caught on the ugly end of this, the system gives them no room to move.  If not these Republicans, then those who will; only the names would change; the outcome would remain the same.

Don’t get me wrong, I’m not asking for a single tear for any of these bought out lawmakers.

I just don’t want the point to get lost.

The real tragedy, of course,  is the death of Trayvon Martin.  In a sense, there can be no justice because their is no equivalent or recompense for the loss of his life.   But the underlying problem is that his killer may never even have to defend his actions in a court of law because of a corrupt political system that does not work for, represent, or even care about the people it is supposed t0 protect.