President Barrack Obama has “evolved” to conform with the growing majority opinion across the country that LGBT Americans are Constitutionally entitled to the same rights as heterosexual Americans, including marriage.

The president had been inexplicably resistant to the idea of marriage equality even though his administration had otherwise made great strides in promoting LGBT rights.  He always described his position on gay marriage as evolving. (As opposed to waiting for the right time, I guess.  Classic Obama.)

Nevertheless, public opinion was changing and pressure was mounting.  The Democratic party supplied the screws.  Joe Biden tightened them on Meet the Press last Sunday.  Then Amendment 1 passed in North Carolina.  It imposes a state constitutional ban on gay marriage, civil unions, and domestic partnerships.

Apparently it combined with the previous environmental conditions to push President Obama’s evolution past the tipping point.

Obama is hilarious sometimes.  But hey, you take the wins where and when they come.

This flip-flop/concession/self-realization/admittance of an actual belief moves us all one step closer to an America that recognizes the Constitutional rights of all citizens equally and the basic human rights of all humankind.

I feel like the Republicans are done for in 2012. 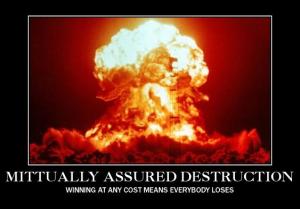 themselves apart in an ugly primary conflict that could drag out and irreparably devastate whoever is left standing to accept the nomination.

At least one can hope.

Ron Paul manages to get about 50% of what he says right.  And he’s pretty damn honest for a politician.  Unfortunately, the 50% he gets wrong he gets waaaaayyyy wrong.  I mean, the Department of Education is Unconstitutional?  By that logic so is the United States Air Force and the FBI.  (And I’m not even touching on how he printed (and profited from) a White Power themed newsletter for 20 years.)

But more than any particular candidate’s shortcomings, I think the actual Republican Party has pushed itself out of the mainstream.

They’ve been virulently opposed to women’s reproductive rights since Roe v. Wade and against sensible immigration reform for a decade.  They’ve spewed rhetoric against multiculturalism,  the labor unions, and entitlement programs for years.  They’ve been trying to shove their interpretation of the Bible down our throats since the 1980’s.  And they’ve tried to disenfranchise left-leaning voters since the Nixon era.  None of that is new.

What is new is that they’re going after all of these groups at the same time.  They started as soon as they took power following the 2010 elections and they haven’t let up since.  I doubt they will relent going forward either.  Maybe they feel like they’re going to get voted out of office soon and they want to make hay while the sun’s shining.  I don’t know.

Actually, I wish the Democrats would legislate with as much vigor.

Another new element is how far they’re trying to turn things back.  Conservatives always want to roll things back, but it seems like these guys want to go back to Dwight Eisenhower’s America.  I mean, anti-contraception?  Seriously?    Then there are things like the trans-vaginal ultrasounds and mandatory drug tests for people receiving unemployment (as well as anyone–who is poor–receiving government assistance).  They’re talking about moon colonies and poor kids cleaning their schools.  Mind you this is in the election immediately following the chickens for healthcare debacle.  It makes them seem very wacky.

It’s already turning people off.  The ultrasound bill looks like it’s been effectively killed.  Scott Walker is being recalled in Wisconsin.  John Kasich in Ohio and Rick Scott in Florida are teetering on the brink.  To top it off, the Republicans came out on the short end of the debt ceiling debate (which may be starting up again around election time).

And for all their efforts, mainstream America is not happy with the Republicans.  Of course, no no one is happy with the Democrats either (although Obama’s labors are now starting to bear fruit).  But the Republicans have done a lot more to alienate voters. They are out of touch with what people are dealing with.  They are too openly supportive of big business.  And they’ve got enemies all over the electorate.

In the end, I think it will probably cost them the election.  And not just the presidency.

There was an interesting article by Andrew Sullivan in The Daily Beast about President Barack Obama showing how both the left and the right have underestimated him and his supposed mastery of fourth dimensional political chess.

This article, however, is nonsense.

Not in its entirety, mind you.  Mr. Sullivan does a nice compilation of the Obama administration’s achievements from a fairly objective point of view.  It’s an argument not made nearly enough in the media, forcing Obama to make it himself.  Sullivan is also effective contrasting the rapaciousness of the right’s attacks on Obama’s every word (even when they agree with it) and the left’s “unjustified” dissatisfaction with the rate and quality of progress.

However, he  uses the actions Obama is criticized for on the left to show conservatives why Obama is not a capitalism-squelching Marxist/Leninist.  Sullivan then ignores everything he just said and uses issues like the passage of Healthcare and Finance reforms into law as proof that Obama is achieving liberal objectives, pishawing the fact that most of the legislation his administration has passed has been gutted of the elements most dear to lefties and much of it by Obama’s hand.

The problem is, Sullivan seems to be  going by the conventional wisdom that progressives are a bunch of wide-eyed stargazers infuriated that Obama hasn’t delivered nirvana.  It’s a gross generalization.  Are there dreamers on the left? Absolutely.  That still doesn’t make it fair, or accurate, to portray all of us in that same light.

I’m liberal because I’m on the left side of most issues, not every issue.  Plus, its a sliding scale.  My spectrum ranges from far left to center right depending on both the issue at hand and the state of affairs at the time.  I didn’t agree with every position Obama took in his campaign, but I agreed with him more often than not.  Since’ he’s gotten into office however, that ratio has inverted.

The problem isn’t what he gotten done or the compromises he had to make.  The problem is that he constantly gives in to the right.  Before the negotiations even begin he hands the republicans the left-wing’s heart.   He runs from almost every fight.  He never even makes the argument.

Does this sound like a president that liberals should be happy with?  Fortunately for the President the Republican candidates are comically absurd.  No reasonable, free-thinking candidate is going to make it  through this Republican party’s primary seasons (As illustrated by Jon Huntsman being criticized for simply saying he defers to science on things like evolution and global warming).

The Republicans are insane and a vote for a 3rd party candidate is a wasted vote.  These are facts the president is acutely aware of.  According to Joe Biden, Obama is fond of saying, “Don’t judge me against the Almighty.  Judge me against the alternative.”